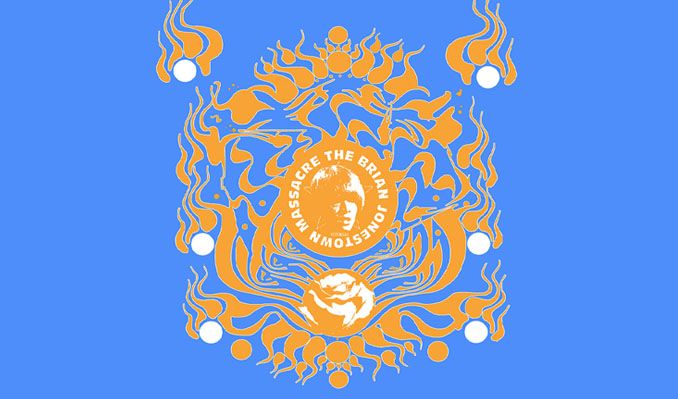 Please Note: For all events, all attendees will be required to show evidence of their full vaccination against COVID-19 OR produce a negative COVID-19 test (PCR or antigen; no 'at home' tests) taken within 72 hours prior to attending the event. Currently, masks are required to be worn inside the venue per local mandate. Such mandates are subject to change.

"Full vaccination" means 14 days or more following the final dose of a US FDA approved or WHO recognized vaccine against COVID-19 (e.g., Moderna, Pfizer, Johnson & Johnson, AstraZeneca/SK Bioscience, Serum Institute of India/COVISHIELD and Vaxzevria, Sinopharm, and Sinovac). Acceptable vaccination documentation may be a physical copy of a COVID-19 Vaccination Record Card, a digital photo / copy of such card or such other proof as is permitted locally. For more information and FAQ’s about this policy, visit aegpresents.com/health-policy.
Read More

Named in tribute to the legendary Rolling Stones guitarist and his influence in introducing Eastern culture and music into the world of Western rock & roll, the Brian Jonestown Massacre formed in San Francisco, CA, in 1990. Some 40 different members passed through the group's ranks over the next half-decade, but their focal point always remained singer/guitarist Anton Newcombe, who along with bassist Matt Hollywood, guitarist Dean Taylor, organist Mara Regal, accordionist Dawn Thomas, drummer Brian Glaze, and "Spokesperson for the Revolution" Joel Gion, recorded the Massacre's 1995 shoegazer-influenced debut LP, 'Methodrone.' A collection of early recordings, 'Spacegirl and Other Favorites,' followed on the band's own Tangible label in early 1996, and was the first of four Brian Jonestown Massacre LPs to appear that year. Next up was the brilliant, 'Their Satanic Majesties' Second Request,' a full-blown homage to the Stones' glorious psychedelic-era excesses. Recorded live in the studio, the grittier 'Take It from the Man!' found the band exploring even broader territory. Finally, the year ended with the release of 'Thank God for Mental Illness,' a showcase for strong country and blues leanings.

In 1997, the BJM -- now consisting of Newcombe, Hollywood, Gion, Taylor, Peter Hayes and drummer Brad Artley -- resurfaced with 'Give It Back!' After signing to TVT, they released 'Strung Out in Heaven' the following year, but the band's own eccentricities kept them from staying on the label. After a few scattered EPs, they resurfaced in 2001 with 'Bravery, Repetition and Noise,' distributed by Bomp. 'And This Is Our Music' followed in 2003. Despite a continued lack of major distribution, the Brian Jonestown Massacre earned the largest profile of their career in 2004, when the band became the unlikely focus of an award-winning documentary, 'DIG!,' which charted the trials of Newcombe and those of his rival, Courtney Taylor, leader of the Dandy Warhols. The 'We Are the Radio' EP followed in August 2005.

Three years later, Anton Newcombe reinvented the band as he had obtained all the releases of his past albums & formed his own label, 'a' Recordings. His first new album on this label was 'My Bloody Underground,' featuring yet another lineup and a hint of shoegaze and noise pop. 'Who Killed Sgt Pepper?' followed shortly after, being made available in streaming format at the end of 2009 and receiving an official release on February 27th, 2010.

The band have toured throughout the years Australasia , Japan , North America & Europe. In 2010 they finished a 16-week world tour which ended in June 2010.

In late 2010, Anton Newcombe found premises for a studio in Berlin & proceeded to work on building the studio. The band released a 2CD compilation of their single releases in August 2011, which has been released worldwide.

In 2012, the band released their 13th full length album 'Aufheben' with tours in Australia, the USA & Europe.

2014 meant touring this time with shows on the West Coast of the USA then a 3-month tour of Europe and the UK. This tour coincided with the release of 'Revelation,' the band's 13th album. Following shortly thereafter Newcombe wrote, produced and recorded the album 'Musique de Film Imagine,' inspired in many ways by the films of Serge Gainsborough, to critical acclaim in Europe, The UK and the US of A.

In November 2015 the BJM once more toured Australia with the show in Melbourne being the closing show of The Melbourne Music Week at The Melbourne Town Hall with participating musicians Deborrah "Moogy" Morgan, vocals on two tracks from 'Musicque du Film Imagine,' along with Matt Sigley from The Lovetones on Keys and vocals and last but not least Ollie McGill from Cat Empire playing the 100 pipe grand organ. In addition the band performed 4 shows in New Zealand.

Newcombe has recently finished the soundtrack for the Phillip John-directed feature length movie 'Moon Dogs,' set in the islands off Scotland.

May 2016 has the band playing a month of shows in the US of A and Canada, and returning to Europe in the summer for a series of concerts. The current band consists of Anton Newcombe, Joel Gion, Enrique Maymi, Rob Campanella, Dan Allaire, Collin Hegna and Ryan Van Kreidt.

YouTubeOfficial WebsiteFacebookTwitter
*Service and handling fees are added to the price of each ticket.