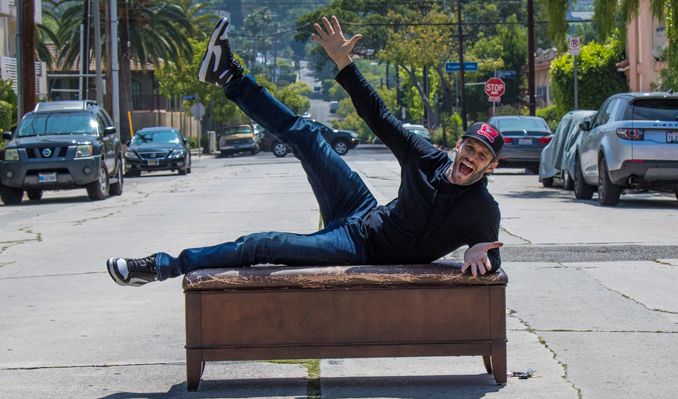 Josh Wolf started doing comedy in Seattle 12 years ago.  After moving toLos Angeles, his unique, honest and high energy style of storytelling made him an instant favorite at The Impov, The Laugh Factory and The World Famous Comedy Store.  He also caught the eye of network TV.  After doing his first one man show at the HBO Workspace, Josh landed a two year talent deal at 20th Century Fox and ABC for his own television show.  Although his show never made the air, Josh learned a lot from watching people develop and write scripts.  He learned so much that he decided to write one himself and he sold it to NBC.  It was titled “Fairly Normal” and it, too, was to have Josh in the starring role.  Being bit by the writing bug, Josh wrote on sitcoms for the next four years working on shows like “Yes, Dear”, Will Smith’s “All of Us” and “Cuts” starring Shannon Elizabeth.

As he was wondering whether to go back for another season of writing, Josh decided he was tired of making other people funny and he jumped back into stand-up. He immediately got cast in Last Comic Standing and was on the season finale as one of the Last Comics Downloaded. Since then he has had acting roles on “All of Us”, he has a recurring role on “My Name is Earl” and he has done several hosting gigs for E! entertainment. He was a series regular on the Spike pilot, “Miss Pole Star,” and is recurring on the new Fox sitcom “Raising Hope.”  He’s currently a regular round table guest and writer on the hit E! series "Chelsea Lately," as well as a performer on the new E! series "After Lately."  He is currently on the road with the "Lies That Chelsea Handler Told Me" stand-up tour and regularly tours with "The Comedians of Chelsea Lately."

Josh is also co-writing a feature for Sony and Happy Madison and hosts "The College Experiment," a comedic weekly online college football show for Fox Sports.  In May 2011, Josh sold his first book to Grand Central, the publishing house behind the books for comedians Chelsea Handler, Tina Fey and Ellen Degeneres.  Josh Wolf is truly one of the most well rounded entertainers in the business and a show you just can’t afford to miss.

FacebookTwitter
*Service and handling fees are added to the price of each ticket.