Against the Current + Trophy Eyes 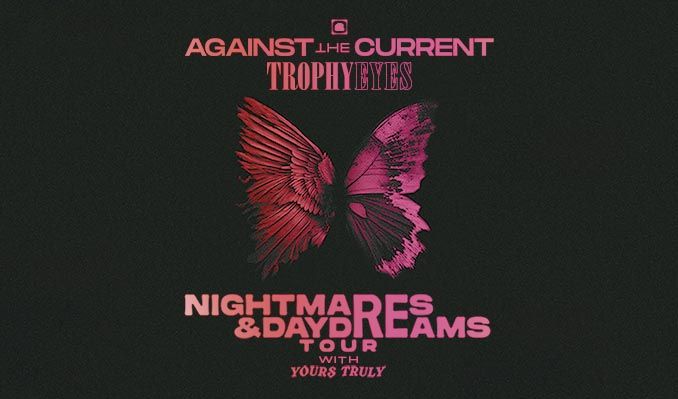 After unveiling their debut album, In Our Bones, in 2016,Against The Current was inspired to change things up. The alt-pop group, who formed in Poughkeepsie in 2011, knew that it was time to evolve the way theywrote songs and allow for the music to surprise them in the studio. They looked to “Wasteland,” a track on In Our Bones, as inspiration for how using new instrumentation and sounds could create something both familiar and unexpected. The band’s second album, Past Lives, kicks everything up a notch.“We approached writing that song so differently than we’dever approached writing a song before,” Chrissy says. “It was such a different experience for us and we really stepped outside of our comfort zone. And you can really hear that on this record. We changed so much of how we write and how we look at songs because of that experience.”The album was written and recorded over the course of ayear, with the musicians penning over 40 song ideasin total.The band spent time in the studio in Los Angeles with producer Andrew Goldstein and in Nashville with producerTommy English, and even laid down a few parts at Will’s home studio. The three band members wrote everything together, each bringing in various ideas and always being open to possibilities. “I felt more comfortable bringing different ideas to the table,” Will notes. “A lot of the songs came from these weird instrumental demos I had that I was uncertain about sharing. I was able to find places in the songs for them and it turned out so well. ‘Voices’ came from that. I had this demo with weirdguitar riffsand I brought it into one of our last sessions in LA. We went in the next day and started a track with it.”“In the past it felt like we needed guitar going at all times,” Dan adds. “But on this record all of the guitar parts are meant to be there.”Thesongs vary in tone and style, but connect over a thematic idea that arose during the writing process. As the musicians were writing “Come Alive,” Chrissy realized that the album was ultimately about learning to come back to yourself after the end of a relationship,or as one chapter of life closes and another opens. The album’s title references the idea that we often don’t recognize ourselves when we look back. “When you’re in those moments they feel so total and so complete and so encircling,” Chrissy says. “Like nothing else could possibly be happening in the world. When you’re in a great relationship or a terrible one, you can’t really remember life before it and you can’t picture what life is going to look like after it. These moments take over your life, sowhen you do actually move past them and you look back,you’ve changed so much coming out of it. It’s like looking back on a past life.”

Anthemicopener “Strangers Again,” one of the first tracks written for Past Lives, is about walking away from a toxic relationship and trying to uncover what happened. “It’s not about what other people did to me,” Chrissy notes. “It’s more about how I reacted to what happened and how I got myself in that situation. I like that sentiment because it takes the weight offtheother person.I’d rather share my experience and talk about what I can do about it and how I can move forward.” “Almost Forgot,” a bittersweet pop tune, brings another unique take on a breakup song, asking what you cando to move on instead of dwelling in sadness or anger. Much of the album is about empowerment, rather than wallowing in negative emotions, which is especially evidenced on “P.A.T.T.,”where Chrissy questions whether she’s good enough for others. That sense of positivity is most palpable on “I Like The Way,” an upbeat, light-hearted number that evokes a ‘50s rock tune. “In every song you can dig up a silver lining,” Chrissy says. “All of these challenging moments are going to come to you in your life, butultimately you’re the person who can change them. I wanted to put that message out there for both myself and others: I’m going to be my own hero. This isn’t about what people did to me, it’s about what I’m going to do now. I think people can relate to that and that connection can bring them peace. Whether it helps them out of it or not I don’t know, but music makes you feel less alone and sometimes that’s enough.”It’s clear that fans do connect. In Our Bonesdebuted at No. 2 on Billboard's Top New Artistschart when it dropped in May of 2016,and Against The Currentboasts a notably loyal fanbase, as evidenced by their strong social stats. With over 301 million channel views on YouTube (as well as 1 million followers on Chrissy’s personal Instagram), the bandhas developed an important relationship with their listeners, many of whom have grown up alongside the musicians over the past few years. The band has toured globally, always willing to share authentic emotions and experiences with their audience. Since 2015, Against The Current has embarked on two headlining world tours, including the “In Our Bones” tour in 2016, and has performed as part of the Vans Warped Tour. They’ve seen incredible success all over the globe, including throughout Asia and in the U.K. The band also joined All Time Low and Good Charlotte on the “Back to the Future Hearts” and supported Fall Out Boy’s 2018 “MANIA”Tour, always building their fanbase up along the way. Past Livesbrings the opportunity for bigger and –even better –stage shows, too. With this album, Against The Current moves into the next phase of theiralready impressive career, opening a new chapter and inviting new fans to join in along the way.

Official WebsiteFacebookTwitter
*Service and handling fees are added to the price of each ticket.